The Extreme Amazon gallery is home to many animals with incredible adaptations. The 3,800-gallon freshwater tank in our Extreme Amazon gallery highlights the way some Amazon fish have adapted to life at certain depths of water. If you pay attention, you will notice fish swimming at the bottom of the tank have mouths that face downward, while fish swimming near the top have mouths that open toward the surface. Specialized jaw structures enable the fish to catch and eat whatever food is available in their habitat, so fish with mouths on the bottom can obtain food from the mud while fish with mouths that open upward are able to catch food at the surface. Extreme Amazon also features freshwater stingrays, a reptilian couple, and an external tunnel that gives kids a close-up view of the animals. 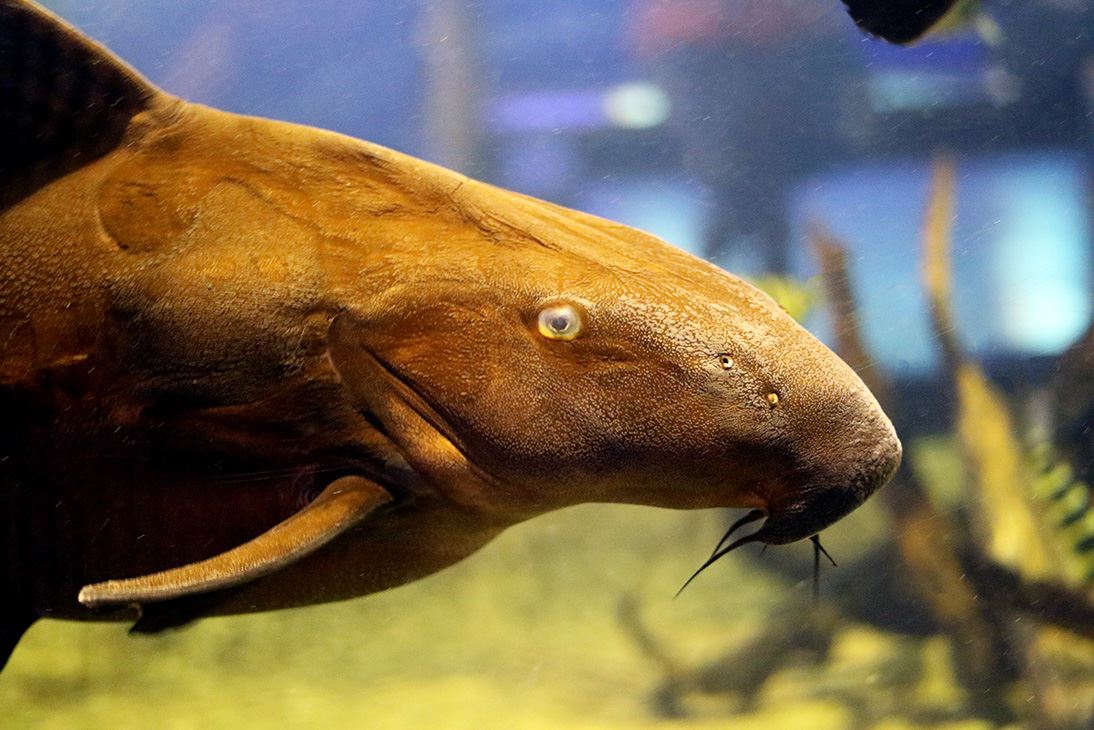 The Amazon rainforest and Amazon River Basin are incredibly important to humans. It is the largest rainforest in the world and is often referred to as the “lungs of the planet” because it produces about a quarter of all Earth’s oxygen. Additionally, it provides about 80% of the food consumed by the developed world. As the second longest river in the world, the Amazon River is one of the most biodiverse regions in the world, meaning it has an incredibly wide variety of different plants and animals. Home to more than 2,000 different species of fish, the Amazon River has more fish species than the entire Atlantic Ocean!

Most of the fish in our Extreme Amazon exhibit belong to the largest group of bony fish known as actinopterygians, or ray-finned fishes. Ray-finned fish account for half of all living vertebrates. They get the name “ray-finned” from the arrangement of the bones in their fins; all ray-finned fishes have paired fins with a fan-like bone structure. They also have a swim bladder, which is a sac of air, similar to a lung, that helps them control buoyancy.

One of the largest groups of ray-finned fish is catfish. Because there are more than 1,000 different species of catfish found in the Amazon River, our Extreme Amazon tank is mostly comprised of catfish.

Ray-finned fish in this exhibit include:

Just like their marine counterparts, orange-spotted freshwater stingrays are cartilaginous fish; instead of skeletons made up of bone, they are made up of cartilage. Freshwater stingrays share many of their characteristics with salt water rays: they have gills on top of their heads, mouths on the bottom, and a venomous stinger along their tail.

Lurking above in the trees you will also notice one male and one female green iguana. Averaging six feet in length and weighing 11 pounds, green iguanas are some of the largest lizards found in the Americas.  Iguanas communicate by bobbing their heads.