The Oklahoma Aquarium’s mission statement is, "To educate and inspire conservation of our aquatic world through interactive discovery." We hope that the more you learn about our blue planet and its inhabitants, the more you will do to protect our natural resources. We encourage guests to "Think Blue To Go Green" because water conservation means planet conservation. 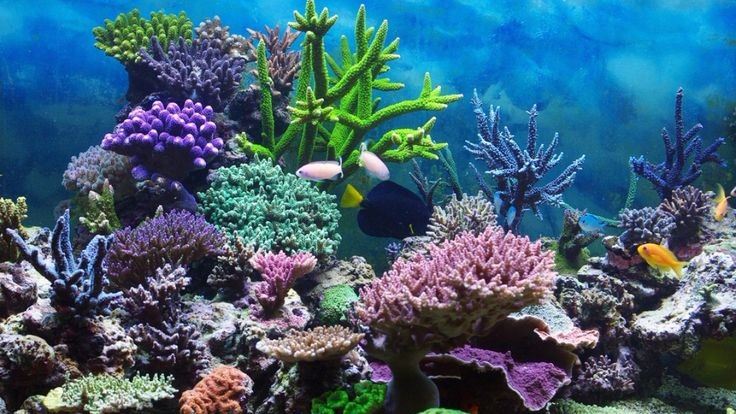 Our biology staff is always looking for new and inventive ways to revolutionize aquariums' environmental and humane responsibilities and related industries. In addition, our biologists conduct research in several areas that will improve the quality of life for the animals at our aquarium, wild ecosystems, and future inhabitants. 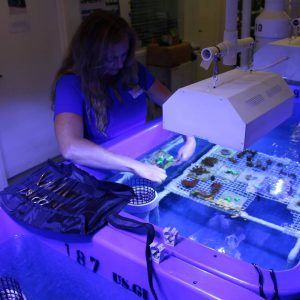 Director of Development and Research, Dr. Ann Money, works cooperatively with Oklahoma State University to help our failing reef systems in the wild. Fluoroproteins are responsible for bio-fluorescence in nature and are commonly found in coral reefs. Coral reefs with more bio-fluorescence may have a slower rate of mass coral bleaching.

This research will explore the response of corals to common stressors found both in a natural setting and in aquaria by the measure of fluorescence emission. The research may identify symbiotic algae that recolonize bleached corals more rapidly. Following that assessment, the attraction of symbiotic algae to coral bio-florescence will be measured. Using data gathered from this battery of experiments, we hope to identify hardier species and combinations of corals and algae. 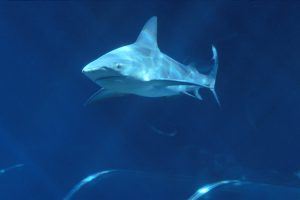 Our biologists are currently testing a new theory in the handling of sharks to reduce the metabolic stress response. It is possible that by handling the animals regularly, the sharks will have a higher survival rate during transport or relocation. Working with the Texas Parks and Wildlife Department, aquarium biologists are also tracking the growth of captive bull sharks and comparing this data with bull sharks in the wild.

There is little known about bull shark reproduction, where they breed, and where they pup. The data that our biologists gather helps answer questions regarding this important apex predator. Our team is the sole contributor of bull shark information with the Elasmoblood DataBase, the largest collection of data on shark, ray, and skate blood parameters globally. 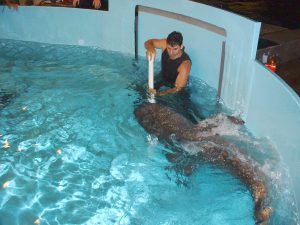 Bull sharks have the strongest bite force per pound of any shark species; they will often bite through mooring lines in the ocean that tether weather buoys. These buoys provide important, potentially lifesaving information about weather patterns out at sea. Partnering with the National Oceanic and Atmospheric Administration, they test the strength of new mooring lines with the bites from our bull sharks.

The Oklahoma Aquarium is proud to partner with Alfredo Mere Alonzo and Greenlight Surfboard Supply to research and develop “Safe Shark Deterring Technology.” Sharks are a source of fear for many, hindering conservation efforts globally. Between one and 10 people are killed annually by sharks; however, humans kill more than 100 million sharks every year. Sharks are vitally important to the marine ecosystem. They are an apex predator, and they help keep the food web in balance.

Researching and developing a technology that would protect both humans and sharks can greatly influence shark conservation. For example, Alfredo Alonzo has been working on a prototype that would incorporate magnetic material into surfboards, and he approached the Oklahoma Aquarium for additional research. Alfredo’s basis for the idea was derived from the observed behavior of avoidance when a shark is near a magnetic source. Sharks have a “sixth sense,” which allows them to detect tiny electrical currents in the water. Magnets produce an electrical current that is sensed by the shark, causing it to swim away from the source.

The Oklahoma Aquarium has the largest collection of bull sharks globally. Bull sharks are considered one of the most dangerous sharks in the world, responsible for more shark bites than any other species of shark. Our collection of bull sharks is perfect for testing the shark deterrent technology. Variables such as water clarity, accessibility, and location of animals are controlled within the aquarium setting, unlike an open-ocean environment. The collaborative research could not only enhance human safety but also increase shark conservation.

In order to eliminate the need for animal acquisition from the ocean, our biology staff practices captive rearing or raising animals in captivity for the purpose of education. These animals currently include jellyfish, seahorses, and several species of sharks. 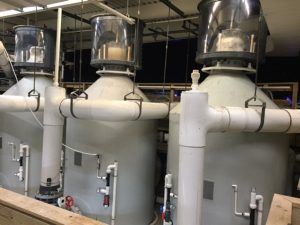 Chief Operating Officer Kenny Alexopoulos and Deputy Director John Money have pioneered new water filtration methods at a public aquarium. The use of ozone for the sterilization of water has proven successful. Our filtration methods are extremely effective in maintaining beautiful clarity and stable water chemistry for the benefit of both our animals and our guests.

The Oklahoma Aquarium has collaborated with National Geographic photographer Joel Sartore for his world-renowned Photo Ark project and Discovery, Animal Planet, Dateline, and BBC for documentaries and research valuable to the scientific community. Our shark exhibit has been included in four documentary features about sharks' life history, biology, and behavior.

Our research staff has been awarded a National Science Foundation scholarship for coral research.

If you would like more information or donate directly to the Oklahoma Aquarium’s research efforts, please contact Dr. Ann Money, Director of Education Programs and Research, at 918-528-1531 or email amoney@okaquarium.org.