UPDATES CLOSING EARLY: SATURDAY, FEBRUARY 26, 2022 Read On... Masks Not Required at the Oklahoma Aquarium Read On...

In this exhibit, you’ll learn that fathers can give birth, animals can produce electricity, and three hearts can be better than one! Visit Marvels and Mysteries at 2 p.m. on Mondays, Wednesdays, and Fridays to witness the creative and bizarre ways some of these fish eat their food. 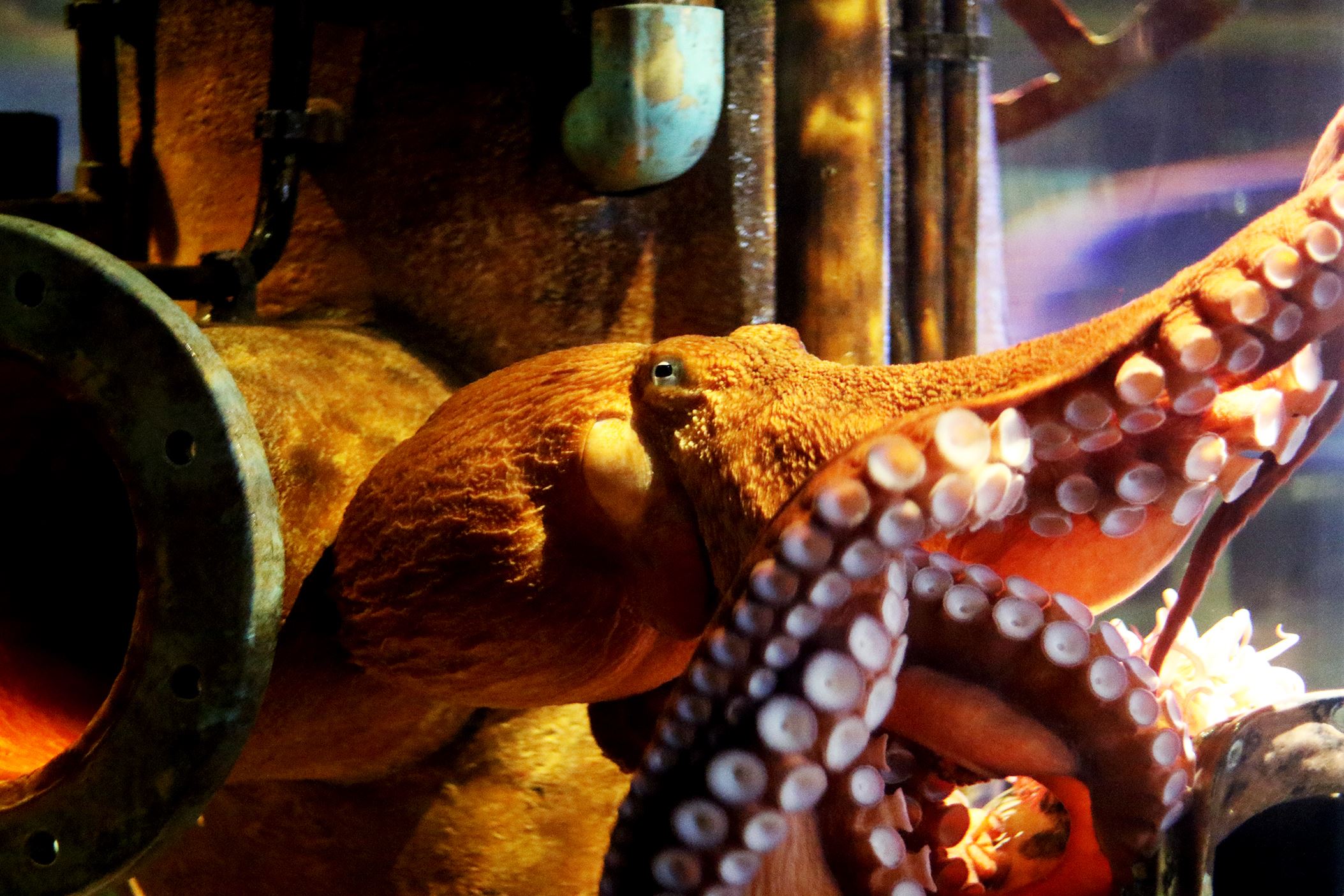 Secret World of the Octopus

The Oklahoma Aquarium opened the "Secret World of the Octopus" in May 2020. The exhibit allows visitors to see a 360-degree view of a giant Pacific octopus (GPO) in a large cylinder tank with a shipwreck-themed structure. The exhibit is inspired by Twenty Leagues Under the Sea, the science fiction adventure story by Jules Verne. The GPO is the largest octopus species; it can grow to 16 feet and weigh more than 100 pounds. The largest recorded GPO was 600 pounds!

This species can regenerate lost limbs and are masters of camouflage with the ability to change color, texture, shape, and movement instantly. Many consider the GPO to be the most intelligent invertebrate in the world.

Fundraising for the new exhibit began in March 2018 when octopus wristbands went on sale for $3 each. The “Expand with a Band” campaign sold nearly 40,000 wristbands by the end of 2018. This is the aquarium’s first exhibit funded entirely through public donations. 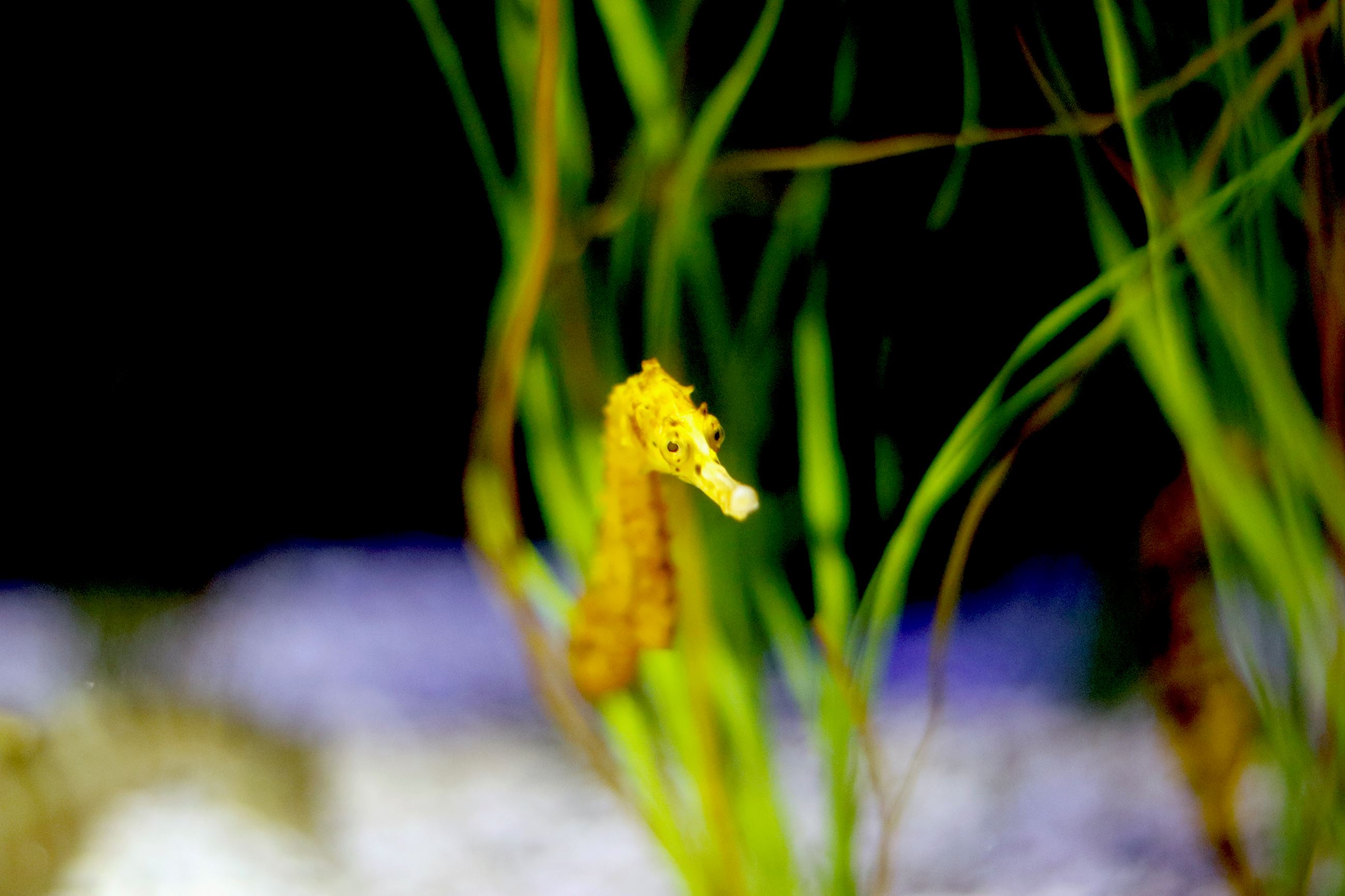 There are 47 identified species of seahorses—and scientists continually discover new species. Our Marvels and Mysteries gallery is home to juvenile and adult potbelly seahorses. These guys are the slowest fish in the ocean; they must beat their dorsal fin 34 times per second to maintain their position in one place. Luckily, they have a prehensile tail, like a monkey, that can grasp objects. This tail keeps them wrapped around seaweed, preventing the current from carrying them away.

Another interesting seahorse adaptation is the male brood pouch. Like a kangaroo’s pouch, the males have a pouch on their abdomen so that the females can place their eggs into the pouches. The male is then responsible for carrying the eggs until they are ready to hatch, at which point the muscles surrounding the pouch contract and free the young “fry.” The freed fry then fend for themselves, as neither parent provides further care. In our Marvels and Mysteries gallery, you may see some “pregnant” fathers in the adult tank and many fry in the adjacent tank.

The stars of the feed show on Mondays, Wednesdays, and Fridays at 2 p.m. are the red-bellied piranha, the electric eel, and the Southeast Asian archerfish. These fish have exciting ways of eating and/or hunting their prey.

Piranhas are notorious for their razor-sharp teeth; the word “piranha” literally means “toothfish.” Their exceptionally sharp teeth interlock in a scissor-like motion to shred their food. Many species of piranhas are vegetarians, and even the most voracious species of piranha, the red-bellied piranha found in the Amazon, is only dangerous to humans when their food source is scarce during a dry season.

The electric eel is another Amazon native. These eel-ectrifying creatures have more than 6,000 specialized cells called electrocytes that store and release voltage. They are the only animal that have this power—literally! They can produce up to 600 volts in a single shock— that’s about as much voltage as 50 car batteries and is enough to knock a person down or even kill them. Electric eels use their electricity to stun their food and defend themselves from threats. Despite their serpentine form, they are not truly eels and are more closely related to catfish.

Southeast Asian archerfish have a super-soaker for a mouth. Like a squirt gun with remarkable precision, archerfish use their mouths to shoot water at insects above the surface, causing the prey to fall within reach for consumption. If they miss on the first few tries, it’s not a big deal because grooves along the roofs of their mouths enable them to shoot up to seven consecutive streams. Archerfish can target their prey from 12 feet away, which is impressive considering the fact that their bodies only average seven inches long. Scientists have discovered that archerfish eyes are adapted with sharp vision above and below the water’s surface.

Like the electric eel, the black ghost knifefish has electrical adaptations. It does not have electrocytes like the electric eel, so it cannot store electricity, but it does use a specialized organ to produce low-frequency electrical currents. Knifefish use this current for navigation and communication. Their ability to sense electricity is called electroreception. It allows them to detect prey and other knifefish’s electrical signals because they can’t see well in the murky waters they inhabit. To find a mate, knifefish produce an electric current that communicates their sex; females produce higher frequency currents than their male counterparts.

Just like the jellies in our Amazing Invertebrates exhibit, the moon jellyfish and the Pacific sea nettle are cnidarians. With few body parts and no brain, it’s tempting to think of jellies as “simple” life forms. However, jellyfish have a complex life cycle. All jellies begin as a fertilized egg and develop into a planula larva, which grows into a polyp. A polyp consists of a stalk with branches, and it attaches itself to the seafloor or a coastal reef. Polyps then take one of two reproductive paths. It may reproduce asexually by dividing in half to create a genetically identical individual next to itself, creating a longer polyp. The other option is for the polyp to develop into a freely swimming medusa. The medusa is the life stage we are all familiar with—a jelly with a bell and tentacles!

Moon jellies can spend up to 25 years as a polyp alternating between periods of feeding only and releasing ephyra, which are basically baby medusas. The Pacific sea nettle has very long tentacles that can grow to 15 feet long!

The most toxic species on Earth is smaller than the palm of an adult’s hand, but you wouldn’t want to hold it! The golden poison dart frog is so toxic that you could die from simply holding one. These rainforest dwellers are found on the Pacific Coast of Colombia, where indigenous people harvested their toxins to put in the tips of blow-darts for hunting (hence the name “dart” frog). Scientists believe their toxicity comes from the insects they eat; thus, our golden dart frogs at the Oklahoma Aquarium are not toxic because we do not feed them those types of insects.

The golden dart frog isn’t the only animal that benefits from its toxicity. Because poisonous frogs are often vibrantly colored, predators learn to associate bright colors with danger and avoid eating animals colored this way. As a result, harmless animals like the mimic poison dart frog have evolved to look like their poisonous cousins.